The Sculpture Program in the Art Department at the University of Kansas continues to build upon a prestigious history.   Sculpture first became an area of concentrated study through the efforts of Bernard Frazier in the 1940s.  Professor Frazier envisioned a program of study that combined fine art, architecture, and physical therapy.  Eldon Tefft joined the program in the 1950s and helped further refine and refocus the sculpture curriculum as fine art.  He was also instrumental in joining sculpture with the School of Fine Art.   In the 1960s, Professor Tefft created a series of national sculpture conferences at KU.  In the 1970's these conferences grew to become the International Sculpture Center, which is the foremost organization in the world for the dissemination of knowledge about all three dimensional artwork.

Professor Tefft continues to be listed on the masthead of Sculpture Magazine as the founder.  In addition, in the 1970's and 80's, Tefft worked with newly hired professors Phillip Blackhurst and Richard Gillespie to create a vastly expanded sculpture program in the new Art and Design Building. The program grew from a crowded 800 square foot studio in a quonset hut behind Bailey Hall to a 7,000 square foot program with separate studios for metal, wood, and foundry.  In the 1990's John Hachmeister was hired to redesign and upgrade the foundry program.

Following Phillip Blackhurst's retirement, Matt Burke was hired and redesigned and expanded the wood studio.  Jon Swindell stepped in to re-invigorate the metal studio program following the retirement of Richard Gillespie.  In addition to the current faculty member's service and research in their respective studios, all three have contributed to expanding the sculpture curriculum including Public Art, Environmental/ Installation Art, Art Car, The Figure/ 3D Anatomy, Wood Studies, and 3D Scanning-Rapid Prototyping.  In addition, the sculpture program has implemented public gallery spaces in Kansas City, helped create two arts incubators, and created a cognition-motor skill enhancement research program at the Kansas School for the Blind.   Our program outreach includes the design of a state-of-the-art, carbon neutral foundry program for the University of Costa Rica.

Posted by Matt Burke Sculpture at 4:47 PM No comments:

It's Sunday in Ohio. Church and breakfast are the day's priorities for the natives. David, my traveling companion, and I are nearing Delaware, OH and David requests a pit-stop. Foretelling, because no sooner had we pulled over, then I saw grey goo squirting from the tire of the trailer in tow. (right side) After a trip inside myself, thinking, "maybe the grey goo is just normal, you know, like sweating," I retruned to pancake flatness. Time to put the spare on. But first, we needed to unload the trailer, probably about 800 pounds of wood in managable batches. That done, I realized we have no lug wrench and a trip inside confirmed that our handy pit stop didn't go as far as servicing vehicles (They would later also not be able to even offer me air, "oh, they took that out a year ago..") Traveling about 20 miles, I purchased a lug wrench from a very nice man at Advanced Auto Parts. I then returned to where I had left David, the trailer and all the trailer's contents. But wait, I jumped! The nuts had been removed by some kind fellow traveller with a spark plug socket. Great! I used the new wrench on the other tire--you see, the spares were a different size than the originals, so if we changed one, we changed both. Next, fill with air.  I used a small electric pump I just happened to have in the back of my truck. A little water on the tire to test for leaks and bummer; Don Ho's "Tiny Bubbles.." became more than just a fun song. The spares leaked. (Time check: 3hours since we pulled off.) Now David and I both ditch the trailer and all my wood, strewn about the front lawn of the service area, to go find tires, on a Sunday, in Ohio. I knew from years experience that most components of a sculpture look like trash to civilians. So I trusted no one would steal my stuff. After a long trip through rural OH, we hit Delaware proper and I went into the first open store I see, a Tattoo parlour. So this is where the other half hangs until 1pm. The nicest man directed me toTractor Service Center "just down the road," which always turns out to be an eternity if you're not from the area. So, 4 hours into the stop, we have 2 new tires. An hour later we are on the road. 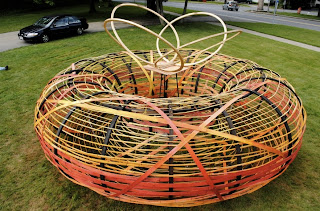 Posted by Matt Burke Sculpture at 10:57 AM No comments:

In 2010 I was invited to install a work on the lawn of the Lexington Art League. Long--impossibly long--story short. The work was 1.crushed by a 200 year old tree 2. burned by a homeless man in an effort to "keep warm."The final work was much different than my initial idea, and I have been fortunate to be able to install my latest work in Lenox, MA as part of the annual SculpureNow show. I don't know what got in the way in Lexington. I probably never will, but the twice loss of a work did teach me something; the press loves disaster. My misfortune generated tons of press. I'm told it even made the crawl of the Today show. Onward. (caption: The tree obviously didn't have it in for the cheap lawn furniture.) 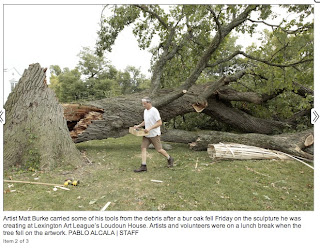 Posted by Matt Burke Sculpture at 10:55 AM No comments:

Here's a traveling tip if you find yourself in the Albany, NY area. The hotels that surround the city fill up on weekdays not weekends. It's opposite from what you encounter in most parts of the country. Typically, Friday and Saturday are the busiest days for most hotels, but In Albany (and maybe other capitol cities) the rooms are booked during the week. This is because the state legislature is in session and assembly men and women must travel to the state capitol in order to engage in sausage making.

Just a friendly reminder when you find yourself in Albany on a Monday! 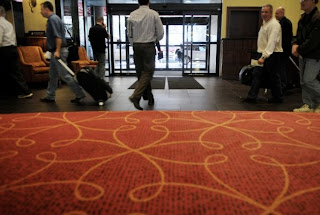 Posted by Matt Burke Sculpture at 10:50 AM No comments:

CHENG LONG WETLANDS International Environmental Art Project in Taiwan  Artists from all countries are invited to send a proposal for a site-specific outdoor sculpture installation that will involve working with local elementary school children to create an artwork focused on making the Cheng Long Wetlands a “greener” place where biodiversity can flourish.

The artist accompanies a Park Ranger on a backcountry patrol. Patrols may accommodate the artist to a certain extent, but artists must be both physically fit enough to attempt such a journey and possess the skills and experience for extended, rigorous wilderness travel. Each year there is one Artist in Residence Patrol of 10 to 14 days. Residencies usually take place during the summer from July to Sept.

http://www.franconia.org/callforart.html#jerome
Posted by Matt Burke Sculpture at 3:04 AM No comments:

Sculpture engages our bodies and our minds. Sculpture is a physical exploration of relationships within and between forms and ideas. In Sculpture we tackle physically essential dilemmas; drop something, it falls to the ground; strike a blow on a material, you’ll leave a mark. Yet art making is also the act of giving shape to spirit. Artists make the invisible tangible, they conjure something the world doesn’t know it needs, yet something the artist desperately needs to see for him/herself. In sculpture we explore the technical aspect of making art, its mythical/conceptual aspect, and methodologies artists use to make work. Through exploration, we come to realize these facets are inter-connected. 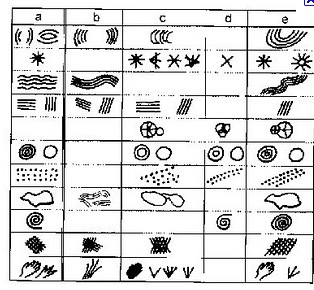 Posted by Matt Burke Sculpture at 11:24 AM No comments:

From an interview with Art Is Moving
http://artismoving.blogspot.com/ 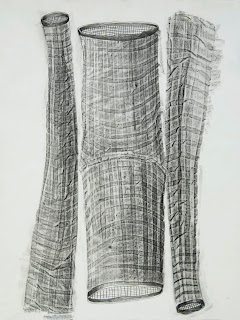 Can you talk about your sculpture?
My work is rooted in physical and poetic understandings of nature, (and I mean nature in the sense of an inter-connected web of people, places, and things.) I place a special emphasis on the relationship of these understandings to my own emotional life. The invisible life of emotions is fascinating to me, and while I’ve used many materials over the years, wood, intensely familiar and knowable, remains the best-suited material for constructing three-dimensional objects that serve as metaphors for human stories. For me, the most prominent – and interesting – characters in these stories are unfulfilled desires, fear, and the expression of a longing for safety and comfort in all its manifestations. I make vessel or “basket” informed work – pieces I call bascauda, from Latin meaning kettle or table-vessel – and think of these as keeping places for past remembrances. I also make work I callmembrana – from Latin meaning parchment or that which covers members of the body – these works recall boats and/or shields, essentially objects that cover and protect the self. My work method involves a lot of laminated wood construction, weaving, binding, etc. I’m drawn to very low-tech assembly methods because I like the direct connection with the materials. I use machines and current technologies, but simply can’t stand the “distance” this puts between me and my work. I like to think of the layers of wood like layers of memories accumulated over time that, like memory, possess both a sense of certainty and a sense of the uncertain.
Posted by Matt Burke Sculpture at 4:16 AM No comments: